For any wine lover, a visit to the Cape Winelands is an absolute must as the region is one of breathtaking scenes with majestic mountains that form a dramatic backdrop to lush, rolling vineyards; elegant Cape Dutch, Victorian and Georgian architecture is on display in an area that is steeped in rich culture and history. The award-winning wine farms offer some of the country’s best wines, with South Africa also having the largest number of Fairtrade certified wineries in the world. The Winelands are divided into various regions, each offering their own “wine route”. The most popular and well known are Stellenbosch, Franschhoek, Wellington and Paarl. Daily wine tasting, tours and sales are offered at most cellars and many of these have restaurants and picnic facilities. Please note that some cellars offer tasting by appointment only. You can experience wine tasting of world famous award-winning wines, warm hospitality and memorable moments just 45 minutes from Cape Town.

Stars of Africa would like to recommend three of these fine estates where the art of wine making in South Africa is experienced at first hand.

Waterford Estate is situated in the picturesque Blaauwklippen Valley, in the world-renowned Stellenbosch region. Founded in 1998 and created through a partnership between two families, the Ords and Arnolds, this 120-hectare property boasts ancient citrus groves, rolling lawns, water features and fragrant lavender beds. The two founders shared a dream to create a wine farm where life is cherished; the seasons mark time and the fruit forever reminiscent of blessings, abundance and the beauty of nature. The winery was designed by architect Alex Walker and created from quarried local bedrock, stones from the vineyard and timber grown on the estate.

The goal at Waterford is to be a world-class winery through quality, consistency and excellent service. Cellarmaster, Kevin Arnold has over 25 years of experience on the slopes of the Helderberg, having spent 9 years at Delheim and 10 years at Rust en Vrede before founding Waterford, and experiencing what every winemaker dreams of – being able to choose the land that will grow the vines of his own wines. He brings a wealth of winemaking and wine-marketing expertise and experience to the team.

Waterford offers a variety of different wine-tasting experiences where, in addition to a standard tasting experience, there is a blend of fine chocolate and wine tasting, reserve tasting and a wine driving safari during which you are taken in a safari type Game Viewing Land Rover around the property that is situated on the slopes of the beautiful Helderberg Mountain. Waterford Estate has chosen to use only half of the total land for planting vines, in order to preserve and maintain the natural flora and fauna of the beautiful Blaauwklippen (blue stone) valley.

As part its biodiversity program, Waterford Estate wishes to show their intension in terms of sustainable agriculture by leaving sections of the property untouched, while showing guests some of the Cape’s natural beauty; the aim being to achieve an organic approach to wine farming. The Cape is home to the largest and most spectacular concentration of flowers and plants found anywhere on Earth. You will also be able to taste wines made from the respective vineyards while being amongst the vines themselves. Out in the vineyards, the “terroir” is explained and you have the opportunity to smell the soil and rocks in which the vines grow, while enjoying the beautiful vistas, geography and topography of the Cape Winelands.

On a wine drive, all senses are explored – sight, smell, sound, touch and taste – in order for you to experience both what is on the inside as well as outside the bottles of Waterford Estate. At certain vantage points, the 350-year history of South African winemaking is explained, while enjoying spectacular views of Table Mountain and Constantia, where it all started in 1652.

De Toren Estate is an iconic boutique wine producer nestled in the Polkadraai Hills, outside Stellenbosch, and consistently acclaimed as one of the finest Bordeaux-style blend producers in South Africa. With its unique gravity driven tower and the biodynamic practices used throughout the entire winemaking process, the finished products have earned local as well as international recognition over the years.

Established in 1994 by Emil and Sonette Den Dulk, the site of De Toren was selected for its superb location and stunning views. To the south lies False Bay, to the west Table Mountain, to the south-west Cape Point, and to the east the Stellenbosch and Somerset West Mountains. The name of the Estate, De Toren, Dutch for The Tower, refers to the shape and architecture of the winery, with its tower that allows for gravity-flow winemaking.

The system of hand harvesting, hand sorting and basket pressing and a 4,000 liter pressure tank in a lift shaft working as a pump produces excellent, complex and well balanced wines. The concept of a gravity fed winery, and of the five Bordeaux grape varieties has proven to be a winning formula, producing South Africa’s first five varietal blend – a milestone in itself. The maiden vintage of De Toren Fusion V, a Bordeaux-style blend of their five varieties, dominated by the Cabernet Sauvignon, was the first of its kind in South Africa.

From the onset, De Toren’s philosophy has been to create a boutique, private winery with the sole focus on producing the highest quality Bordeaux-style wines possible – wines that could compete with some of the best in the world. De Toren’s wine crafting objective is to develop and re-define the Bordeaux concept, and adapt it to be uniquely South African, achieving complex, balanced and expressive wines. The wines were first introduced to the international market towards the end of 1999, and have since won many awards and accolades, proving that De Toren had earned a place amongst the world’s elite.

Albie Koch, the dedicated Managing Director has many years experience from having worked in a wide selection of wineries around the world. Charles Williams, who holds a masters degree in viticulture, is De Toren’s chief winemaker and mastermind behind Fusion V, its flagship wine. This complex, profound and supremely well-balanced wine is recognized as one of South Africa’s finest Bordeaux and is a blend of only the very best of the five red Bordeaux varietals that the estate produces; Cabernet Sauvignon, Merlot, Cabernet Franc, Malbec and Petit Verdot.  The vineyards that produce the grapes for Fusion V face west and are slightly warmer with slightly more exposure to sunlight and more granite in the soil. All five Bordeaux varieties are grown here but Cabernet Sauvignon is predominant. This wine is bigger, bolder and more concentrated than the later De Toren Z and was first released in 1999 when it received a remarkable 90 points for its maiden vintage. It was the first ever new world wine to do this and has sold out every year since then, with demand worldwide always outweighing supply.

In 2004, a new wine, De Toren Z, another Bordeaux-style blend, was added to the cellar, but this time dominated by Merlot – the Z is a tribute to Zephyrus the Greek Goddess of the wind. This new vineyard is a cooler vineyard, facing the ocean, with the rows directed into the prevailing winds, again producing all five Bordeaux varieties, but now with Merlot predominant. In South Africa, south facing slopes are the coolest slopes – the very opposite of the northern hemisphere, where the north facing slopes are the coolest. This cooling effect is extremely important and one of the fundamental pillars on which De Toren’s quality relies since South Africa has a warmer climate and more sun than the old world – this cooling effect helps to mitigate the effect that added heat would have on the fruit.

At De Toren, there are neither guest cottages, nor restaurants, and only a limited range of wines. Everything done here revolves around the expert production of the two Bordeaux-style blends, as the winemakers strive to improve these wines vintage by vintage. Wine tasting at De Toren is by appointment only. A truly enriching, inspiring and exclusive experience under the auspices of the passionate senior personnel, who generously will share their vast knowledge of winemaking as you are guided through the entire production process. Every tasting is an hour and half and includes a walk through the vineyard, cellar, maturation room, and finishes off with a tasting of De Toren’s wines.

For 315 years, Rust en Vrede has stood peacefully among the vineyards of Stellenbosch.  Through centuries there were periods when wine was produced, but for the last 32 years the family have specialized in producing only red wines with the focus on Shiraz, Cabernet and Merlot. Many accolades have been bestowed upon the estate, some of the more memorable being when Rust en Vrede was chosen by President Nelson Mandela 1993 to be served at the Nobel Peace Prize dinner and when Rust en Vrede was the first South African red wine to be nominated one of the Top 100 Wines of the World.

Rust en Vrede became the first private winery in the country to specialize in the exclusive production of red wines, and in the early 1980s became the first producer in South Africa to make a blend of Cabernet Sauvignon, Shiraz and Merlot. This award-winning wine would later become known as Rust en Vrede Estate. Jean Engelbrecht is the proud proprietor and Coenie Snyman the winemaker since 2007. His core beliefs are that good grapes and wine are truly gifts from nature, and he embraces the opportunity to work with the best grapes that nature and the human influence can produce. Coenie Snyman won the coveted 2009 Diners Club Winemaker of the Year for his 2007 Rust en Vrede Cabernet Sauvignon.

Rust en Vrede Restaurant
In the original cellar, now a National Monument, an immensely satisfying culinary experience awaits, whether you select the 4-course or 6-course set dinner menu, beautifully presented food paired with delicious wines will appear at your table as you move from one taste sensation to the next. The chef, John Shuttleworth, and sommelier, Joakim Hansi Blackladder, and the entire team at Rust en Vrede thrive on the rarest of achievements – exceeding expectations. 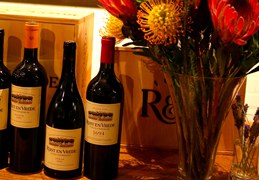 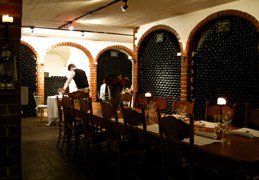 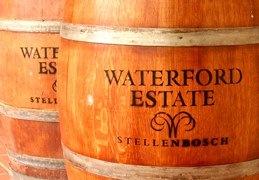 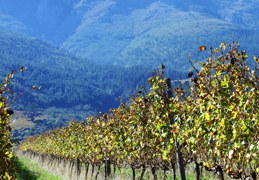 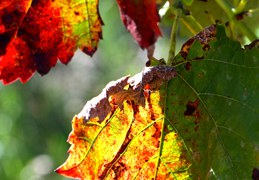 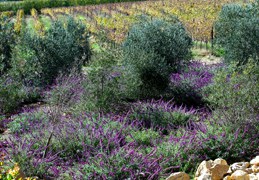